Amid Raj Kundra’s arrest, Shilpa Shetty uploaded a cryptic post: ‘Made A Mistake, But It’s Okay’ For the last couple of months, Shilpa Shetty has been going through a bumpy phase because of husband Raj Kundra’s arrest for allegedly making pornographic content and sharing it through applications. She has resumed working as a judge on her dance reality show Super Dancer Chapter 4.

‘Super Dancer 4’ judge has been communicating via book excerpts recently, amid an ongoing controversy that her family is involved. On Thursday, she took to her Instagram Stories to share pictures of an excerpt from a book that talked about mistakes and learning from them.

Taking to her Instagram story, Shilpa posted a cryptic note that reads, “Mistakes are part of the dues one pays for a full life – Sophia Loren. We can’t make our lives interesting without making a few mistakes here and there. We hope that they won’t be dangerous mistakes or mistakes that hurt other people. But there will be mistakes. We can see our mistakes as things we’d like to forget or as our most interesting, challenging, and stimulating experiences. Not because of the mistakes themselves but because of what we learned from them.”

The note concluded, “I’m going to make mistakes, I will forgive myself and learn from them.” Shilpa added a sticker that read, “Made a mistake but it’s okay.” It was unclear what mistake Shilpa was referring. 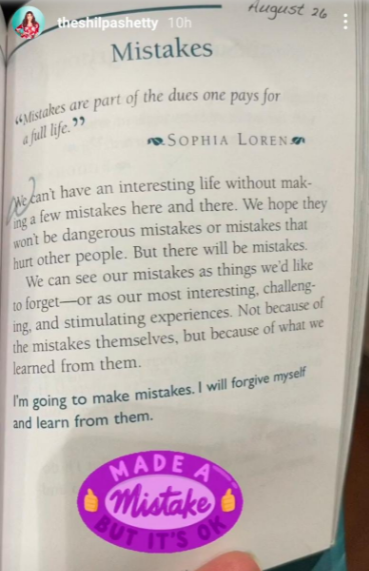 Police have already clarified after investigations that there is no active role of Shilpa Shetty in the crime.