Richa Chadha took to her Instagram, says her bae Ali Fazal is her soulmate

Fukrey co-stars Richa Chadha and Ali Fazal’s relationship is going strong since 2013 and showing no signs of slowing. They have painted the town red with their love and romantic pictures and videos on social media.

The couple was expecting to get married the previous year, but due to the pandemic, it turned out to be a spoilsport. Ever since they confirmed their relationship, the duo makes sure to treat their fans to adorable pictures of them and surprise them with their funny social media banter. This time Richa added a little excitement to make everyone think that the couple is getting married.

Richa took to her Instagram account and dropped a picture with her beau Ali Fazal – dolled up in ethnic attire. In the candid shot, Richa wore a yellow lehenga, and Ali complimented her in an ethnic outfit. The two of them were sharing a laugh while posing on a couch.
“When you realize you are soulmates cuz you both LOLd together when the sofa made fart sounds @alifazal9,” Richa wrote in her Instagram post. “Hahahaha.. love ya partner,” Ali commented. 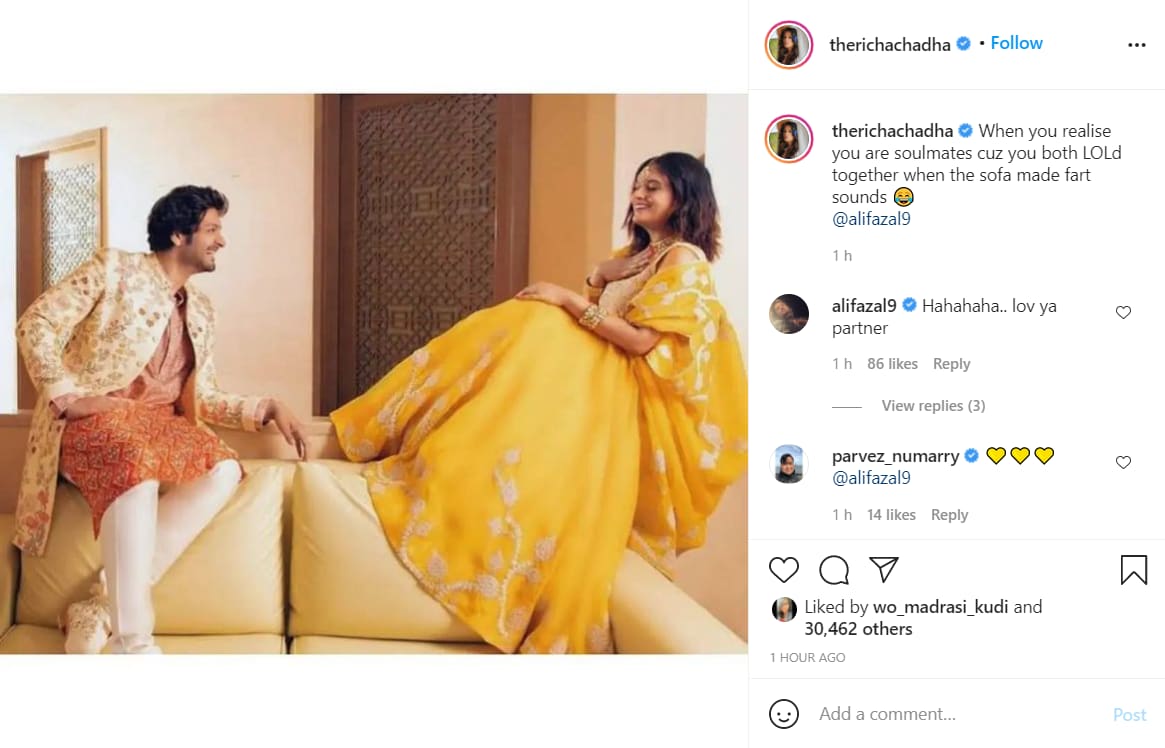 After seeing the picture, fans cannot stop speculating if it is her cryptic way of telling her fans about the marriage.

But before getting into any speculations or conclusions, here is what we have to clear about the picture, it is an old photo from a magazine photoshoot. Ali and Richa graced the cover of Brides Today’s June-July edition and this photo was shared from that photoshoot.

Talking about the delay, Ali had told Hindustan Times last year, “Sabki life postpone ho gayi hai, shaadi toh (Everyone’s lives have been postponed, what’s a wedding in comparison)… let’s see what comes out of this in the new world. I hope we come out as better people, a better system, a better climate. I think there’s a major churning happening above, below, inside, and outside… everywhere. It’s definitely a time to reflect.”

On the work front, Ali and Richa will share the screen in Fukrey 3, directed by Mrighdeep Singh Lamba, along with Pulkit Samrat, Varun Sharma, and Manjot Singh.

CISF clears that the officer who stopped Salman Khan was ‘suitably rewarded for exemplary professionalism,’ not punished